Keeshon’s Story: A Knock Heard Round the Hood – Part 1

In 1775 British forces were stomping through Massachusetts with their eyes set on seizing weapons stockpiled by the American colonists. On this journey they encountered a small army of minutemen and as it is reported, “somebody fired the first shot.” This led to another small battle later that day that left the British retreating back to their home base. This first shot is famously known as “the shot heard round the world.” It began the Revolutionary War, and eventually led to the freedom that many of us live in today.

It may be a little unconventional to start a blog series with a history lesson. But what can I say? I’m a teacher in practice and at heart. When I was growing up, I never imagined I would be a history teacher. For me, life was limited to a host of undesirable options, all of which ended with me living in a crime-infested reality that would either get me incarcerated or on a t-shirt (in my home area, we put our dead friends on t-shirts to commemorate them). I was loved by enough people that if I did happen to die, I would become like the many of my friends or cousins that had met the bad end of a gun. I would be grieved over for a week, and then never mentioned again.

You can imagine my skepticism when a group of white people came into my neighborhood (what we call to this day “the hood”), and preached a message that promised a different path. A path that would avoid spiritual death entirely, and minimize earthly death and its effects. A path that would lead me to live in joy and in endless hope, helping me to forgive anyone who had ever wronged me and have unwavering peace. A path that would help me know the force or entity that had created me in the first place. All of this sounded like a fairy tale that rich white people told kids like me to bring me into compliance. While they lived more reputable lives than myself, I sat and listened to their doctrine. I resented it all, and for a brief part of my life, came to hate God.

All of this changed at the hand of one man who was directed by God to do something many of us do on a weekly basis. One knock on the front door of my run-down row house started the course that would cause me to fall in love with Jesus, have eternal life, and learn to love others as well. Some call it the butterfly effect, others a spark that catches the flame. I call it the knock heard around the hood.

I met Jonathan at the door with this question on a summer afternoon almost 14 years ago. White people never came to our place with good intentions or purpose. They were either there to sell us something, take something from us, or take us away. So many times I had seen people come in and cut off our electric, our gas, or our cable. I only ever truly cared if I lost my television; there wasn’t anything else to do. I lived a very lonely and reclusive life.

White people also came when they wanted to solicit for things. There weren’t many Mormons, but Jehovah’s Witnesses would come around regularly. They always walked away as fast as they knocked; very few ever actually wanted to speak with us. So when Jonathan, a tall, lanky Mennonite man was in front of me, I thought of him as the same. I really became disinterested when he began to speak to me about church. He wanted to invite me to a Vacation Bible School that had begun the night before. Church for me had become a cuss word. Not just because of the racial attachments I had given religion, but also because of my experiences at a certain Baptist church the year prior. Every weekend, many buses swept through York and local cities to pick us up for church. This church became a regular part of my life on Sunday mornings. Initially my curiosity was strong, and I was always well behaved and compliant. The candy was an immediate draw, and the noise somehow exhilarated me. This was how you reached city kids, through junk food and noise.

It was always a snap into reality when we would reach the church and I saw a gym full of 300+ kids. Brother Carl would give a riveting and sometimes gym shaking sermon, and it would always be followed by an altar call. I answered that altar call many times, with hopes that what was being preached to me was true. “If you accept Jesus as Lord and Savior, your life will turn around and you will be prosperous.” We learned about David, Joshua, Moses, and others and were told that if we chose to follow the God they served, we would do things just like them. But whenever I would return home, I saw a hellish existence. I was promised heaven on earth, but experienced the exact opposite. To me, church was the white man’s way of getting together to socialize. When people like me showed up, they would turn their attention to us and shout at us to not be as messed up as we were. There was no appeal to Jesus, no telling of His miracles or His intentions for my life. Just Bible characters and false promises given to a group of vulnerable young people with little to no hope. So church became something I was no longer interested in, and God was a buzz word that caused me a lot of pain.

Just before I could close the door, dad came to speak with Jonathan. My dad knew that even if we didn’t like these people, they could be cops, and we can’t shut the door on a cop’s face. I left to sit down and disregarded their discussion. Dad came back in and told me I was going to church. I met him with a defiance that I didn’t often have, but dad gave me “the look”. In our culture, that was all it took to know that this wasn’t a battle I wanted to fight. But I didn’t worry too bad though, because I had a plan.

When the Mennonites came to pick me up, they had a crusty white van full of loud kids. I began to wonder if this was going to be a moderate version of the Baptist church I had attended. I also remember having an intense curiosity as to why they were “Anti Baptists” (Clearly I had misheard “Anabaptist”). I didn’t recognize any difference in the men, but I hadn’t met a Mennonite woman yet. I was “Anti-Baptist” too, but I was also Anti-Mennonite.

That changed when I entered the church building, and saw a host of kids I knew from school, and several Mennonites. The women had weird cloths on their heads and wore really ugly dresses. I was so confused, but I was too focused on my plan to let any of that phase me. When I was taken into the sanctuary, I began screaming every cuss word I could think of. I didn’t want to be seated because I thought once that happened, I would be stuck. My group leader immediately grabbed me,walked me to the back of the sanctuary, and was about to take me home. But Jonathan was at the back of the sanctuary, and he wouldn’t let me leave. I was so confused that I completely sat down in shock. I didn’t understand why someone would keep me after I had done everything I could to disrespect them.

I did eventually get kicked out that night anyway, as Jonathan was not able to shadow me the whole night. I had become victorious, but only for 24 hours. The next night, they were back at my house, ready to pick me up again. This process repeated itself all week. I was either getting kicked out or making my group leaders wish I was gone. I was doing everything I could do to make myself unlovable, and I even began to resent the fact that they kept trying. One of the group leaders caught onto this and asked me why I refused to be good every night. He even alluded to the fact that he just wants to love me like God does. I replied, “I don’t want to be loved!” And I meant it. I could see the heartbreak it caused for him, and I’m ashamed to say it caused me some kind of sadistic relief. I was happy that I could win, and that they couldn’t get through to me.

The turning point didn’t come until the closing picnic. I wasn’t supposed to be picked up, but they did anyway. This was the trend of the week; their desire to be a part of my life transcended the rules and the set expectations. This is also something I try to remember today as a teacher.

The picnic was a different experience than the rest of the week. For the first time I came with a different energy. I came in almost defeated and even worn out by the love I had been forced to encounter during the week. This opened me up to see my group leaders in a different light, and they capitalized on that. We played so many games, and my chubby body had trouble keeping up with all the fun we were having. I was too distracted in my competitive desires to worry about causing havoc. My outlook had taken a complete turnaround. I left the picnic seeing the Mennonites as people; human beings that were able to share experiences with me. Up until this point I saw them as above me and inaccessible, but now we were holding hands running around in a circle. It is no mistake that when they decided to come down from their perch of authority, they were met with more cooperation. This is yet another thing I always use to balance what is normally a strict learning environment for my students. There needs to be days where we just have fun.

It would be 2 weeks before I would encounter these people again. I thought their interaction with me was a “flash in the pan”, and that the misery I returned home to was once again my complete reality, just like last time.

Keeshon Washington is a teacher and mentor at Tidings of Peace(TOP) Christian School in York, Pa. He became a member of the local Mennonite church there when he was just 13 years old, and after graduating from TOP spent two years attending Faith Builders educational programs. Since returning, he has dedicated his time to teaching social studies, discipling several young men, mentoring youth, and bridging gaps wherever he can in the Menno-world. Read more from him and what he is passionate about at urbanitemusingskw.wordpress.com 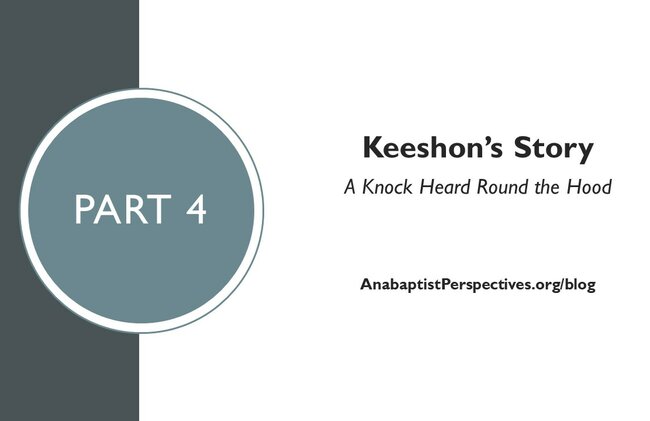 3 responses to “Keeshon’s Story: A Knock Heard Round the Hood – Part 1”